The hardness of water is determined by the number of particles contained in a measure of
water. The SOFPAC system attacks and pulverizes the particles in the water chemistry with an
electronic frequency, changing its polarity thousands of times per second. The particulates are
neutralized and released by the water molecule. Water is now at its most aggressive level to
clean any previous scale build up. Once scale is removed, water will be more soluble with
detergents and enhance the total cleansing process.

Differences Between SOFPAC and Other Descalers

SOFPAC’s patented triangulated waveform is unique since it continuously changes polarity
without interruption. Other descalers use a square wave-form, in which the only time this frequency is actively attacking water is during the vertical rise of the waveform. During the plateaus water is untreated. A triangulated waveform has no plateaus which results in Continuous Active Treatment of water.

The Square Wave descaler (Figure 1) modulates the frequency from 2,000 to 4,000 cycles per second. Their power is from 23 mA to 28 mA. There is no treatment of water during the plateaus of this type of Descaler.

There is no treatment of water during the plateaus.

The SOFPAC technology (Figure 2A), utilizing the triangulated waveform, modulates frequency from 2,500 to 7,000 cycles per second. Our power output is from 25 mA to 250 mA (Amperage will increase for larger models). Therefore, it provides more power and greater frequency with continuous triangulated wave form technology to effectively attack extreme hardness levels and high volume of water (as shown in Figure 2B).

Water is treated on reversal of polarity and provides continuous active water treatment. 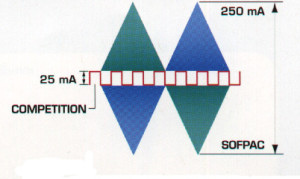 As shown above, when two types of wave generators are superimposed, the triangulated wave offers more power and a continuously modulating frequency to water particles.