The invention relates to a device and method for neutralizing and preventing formation of calcium-hydrogen carbonate scale in water flowing through a conduit.

It is common for water carrying conduits to become clogged by calcium-hydrogen carbonate scale adhering to the inner wall of the conduit. The clogging causes a reduction in the flow rate and requires increased pressure to maintain the water flow. The loss in efficiency increases the cost associated with operating systems using water conduits.

Prior Methods of Scale Control

Several chemical approaches have been offered to prevent scaling in water systems. One approach uses an ion exchanging mechanism to create neutral molecules that will not adhere to the insides of the conduits. This approach works by adding sodium chloride (NaCl) to the water system. The sodium chloride chemically interacts with the calcium-hydrogen carbonate scale and forms neutral molecules that are carried in solution until they can be flushed out at a later point.

In order to treat the water chemically; direct access to the water is required. Depending on the system to be treated, direct access is not always easy or feasible. Addition of chemicals can also limit the use of the water being treated. It is generally recognized that treatment of drinking water with chemicals is not desirable. The addition of chemicals treats a certain volume of water. In order to treat water that is added later, more chemicals must be added to the system. This is expensive and time consuming. Once added, chemicals are not easily removed.

The invention is a descaling device and method useful on water conduit systems to neutralize and prevent the formation of scales. The device includes an electromagnetic coil adjacent the water conduit and a specialized power supply for the coil.

The power supply produces a triangular wave current signal having variable amplitude and frequency. This signal is applied to the ends of the coil to energize the coil and form a corresponding variable electromagnetic field in the water flowing in the conduit. The field varies with changes in frequency and amplitude of the power signal. The field changes strength in response to changes in the signal amplitude. Changes in direction respond in the change of the current flow. The interaction of the fields with the water provides an effective method of treating the water to neutralize and prevent formation of calcium-hydrogen carbonate scales.

Once installed, the device continuously treats the water flowing past the coil without the need for additional parts or attention. The device has a long useful life.

The field generated by a variable frequency and amplitude triangular wave current signal changes direction and strength at varying rates. This field effectively agitates different size molecules likely to form scale to break bonds between the molecules and water and prevent scale formation. The variations in field strength increase the effectiveness in treating different size molecules. The use of a triangular wave input current signal agitates ionized molecules continuously with a field direction reversal once each cycle.

Other objects and features of the invention will become apparent as the description proceeds, especially when taken in conjunction with the accompanying drawings illustrating the invention, of which there are four sheets and one embodiment.

Description of the Drawings 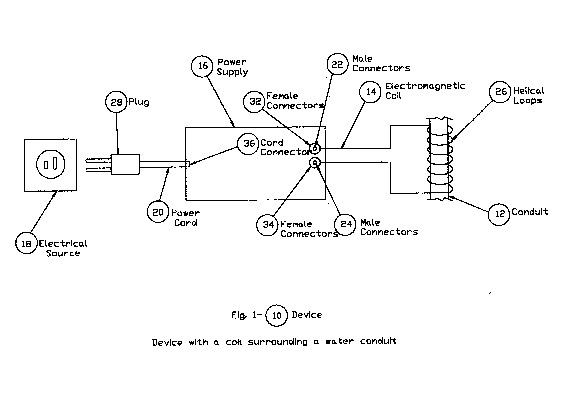 Figure 1 is a view of the device according to the invention with a coil surrounding a water conduit.

Figure 2 is a view of an electromagnetic coil adjacent a water conduit. 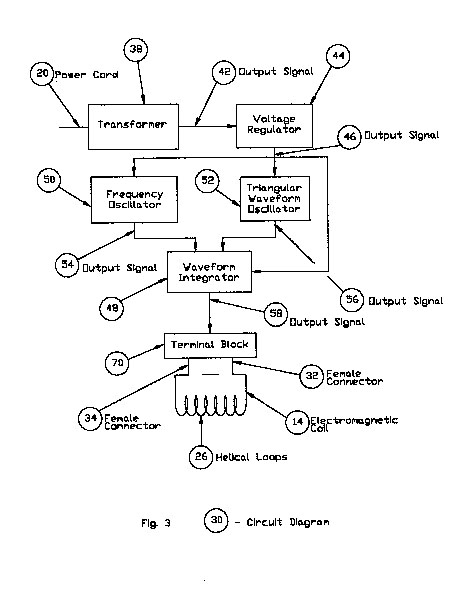 Figure 3 is a block circuit diagram of the power supply for the device. 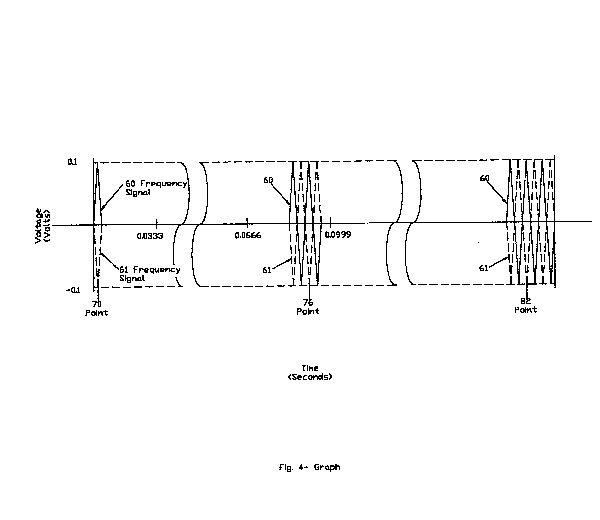 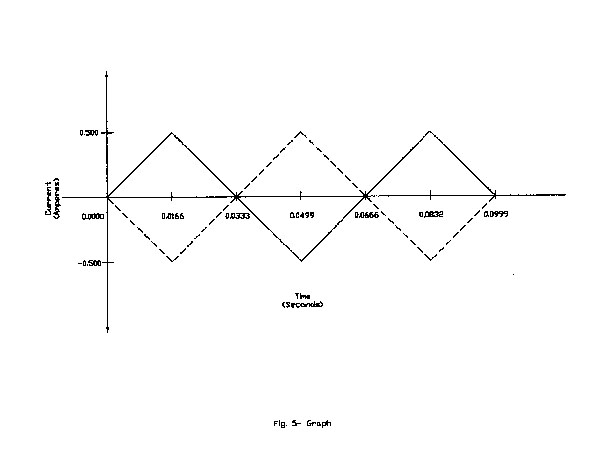 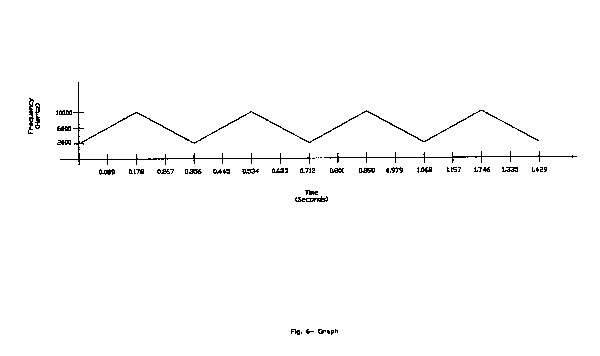 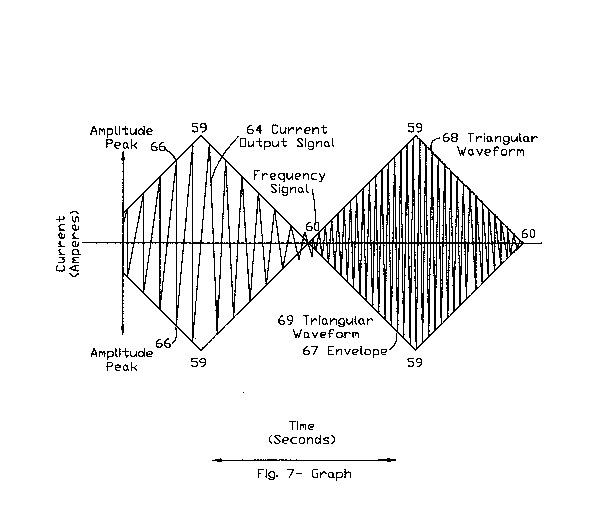 Figures 4 through 7 are graphs of output signals illustrating the power supply from a variable frequency oscillator, a triangular waveform oscillator, and a waveform integrator.

Description of the Preferred Method of Scale Prevention’s

As illustrated in Figure 1, descaling device 10 is for neutralizing and preventing formation of scale in water flowing through a conduit 12. This includes an electromagnetic coil 14 surrounding water conduit 12, a power supply 16 having output terminals connected to the ends of coil 14, and source of electrical power 18, which can be a conventional 120 VAC source. A power cord 20 connected is shown between source 18 and power supply 16. Coil 14 includes two male connectors 22, and 24, each connected to an end of coil 14 and a plurality of helical loops 26 surrounding conduit 12. Plug 28 on cord 20 engages source 18.

As shown in Figures 4 and 6, frequency signals 60 and 61 are composed of continuous triangular waveforms that oscillator 50 continuously varies in frequency from 2kHz to 10kHz and back to 2kHz every 0.356 seconds or at a frequency of about 2.8 cycles per second. Signal 61 leads signal 60 by ½ cycle so that signal 61 appears as an inversion of signal 60. Figure 4 illustrates both signals 60 and 61. Figure 6 illustrates the linear repetitive change in frequency.

As shown in Figure 5, amplitude signals 62 and 63 are composed of triangular waveforms with a frequency of 15Hz and peak amplitude of +/- 500mA. The signals have linear slopes. Signal 63 leads signal 62 by ½ cycle so that signal 63 appears as an inversion of signal 56.

As shown in Figure 7, the current output signal 64 of waveform integrator 48 varies in frequency and amplitude with the positive and negative amplitude peaks 65, 66 generally lying on an envelope 67 defined by two interacting triangular waveforms 68 and 69, which are inversions of each other. Waves 68 and 69 have the shape of signals 62 and 63 shown in Figure 5.

The output signal 64 continuously varies in frequency according to signals 60 and 61. Output signal 64 is a complex waveform that varies in frequency in step with the frequency change of signals 60 and 61 and varies in peak amplitude in step with the amplitude change of signals 62 and 63. The waveform of output signal 64 is a generally triangular wave with steep linear slopes extending up to a positive peak amplitude 65 and then steep linear slopes extending down to a negative peak amplitude 66. The value of the peak amplitudes 65 and 66 vary with time and are defines by envelope 67. The value of the slope is constantly changing due to the constantly changing, the sides of the individual waves may be slightly bowed up or down between peaks. Figure 7 shows straight wave sides for convenience.

Frequency oscillator 50, powered by signal 46, generates frequency output signals 60 and 61. As shown in Figure 4, signals 60 and 61 are two triangular waveforms that continuously vary in frequency from 2,000 to 10,000 Hz. By varying the frequency between a minimum and maximum, device 10 can effectively treat the water without regard to nearby electromagnetic sources that might otherwise interfere with improves the effectiveness of descaling.

Waveform oscillator 52 generates amplitude output signals 62 and 63. As shown in Figure 5, signals 62 and 63 are two triangular waveforms that forma diamond shaped wave and continuously vary in peak amplitude from 0mA to 500mA back to 0mA in one cycle with a frequency of 30 cycles per second.

By using signals 62 and 63 to vary the amplitude of the Figure 7 output signal between a minimum and maximum, device 10 can effectively treats a variety of molecules in the water. Different size molecules react differently to various field strengths. Varying the amplitude of the signal output varies the strength of the field, which improves the effectiveness of the descaling operation allowing treatment of a variety of impurities.

Output current signal 64 is applied across ends of coil 14 causing a time varying current to flow in loops 26. The time varying current causes loops 26 to act as a solenoid and generate a magnetic field. Ampere’s law describes the magnetic field with the right hand rule determining the direction of the field and the strength of the field defined by

As indicated by the formula above, the strength of the magnetic field varies with time when the current varies with time. The time varying magnetic field induces a current inside the conduit 12 and a resultant electric field. The electric field is described by Faraday’s law of induction with the strength of the field defined by

The magnetic and electric fields produced by output signal 64 permeate conduit 12 and interact with the water flowing in conduit 12. Calcium and bicarbonate molecules each contain a charge q. When the molecules with charge 1 move through the electric and magnetic fields, the molecules experience a force vector. The force vector is a result of the Lorentz force described by:

Abstract of the Disclosure

A descaling device for neutralizing and preventing formation of calcium carbonate or other scaled in a water conduit includes an electromagnetic coil adjacent the conduit and a power supply for the coil. The power supply generates a complex triangular waveform output signal that varies continuously in frequency and amplitude. The output is applied across the ends of the coil creating time varying magnetic and electric fields. The fields physically interact with molecules in water flowing in the conduit to neutralize existing scale and prevent formation of new scale.